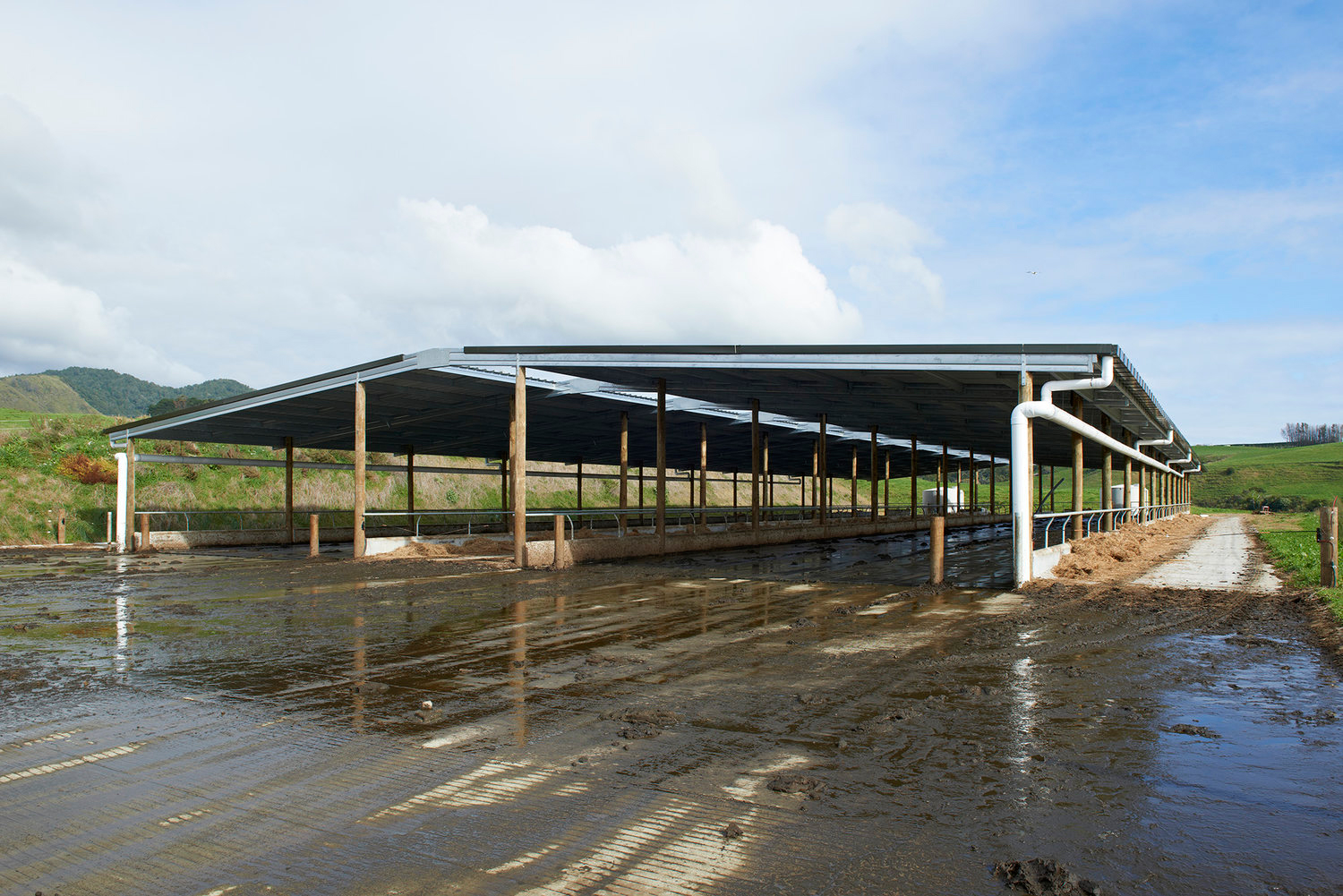 The cows of Kybush Surf Trust in Opotiki are spoiled. They live on a well-run farm, and farmer Shane Armstrong has recently installed a new covered feed pad just for them.

Shane says his cows are treated to the covered feed pad when it’s wet, windy or just a bit too hot. “It’s working really well,” says Shane. “We put the cows in here in the heat, and they don’t leave until night-time, even with the gates open and no feed in here.

“They’re just very happy in here. When it starts getting a bit wet – which is does around here – we’ll be using it all the time.”

Construction of the roofed feed pad began September 2017 and it was ready for use in January 2019.

The shed can house all of Shane’s 400-plus cows and will help with Shane’s conversion towards an organic farm, thanks to the floodwash system.

“With the floodwash, we open the taps and it cleans the whole feeding pad. It’s all greenwash, so it’s recycled water that goes round and round.

“The effluent system filters out the greenwater and pumps it back up, and the solids are kept in a bunker for other uses. We’ve started a worm farm so we feed the solids to them.”

With feed walls running down the middle and along both sides, the shed means Shane’s cows can be protected from the elements and still enjoy a good feed.

And with that many cows eating in one place comes a bit of a mess at the other end. But Shane has it sorted. As well as his new feeding shed, Shane also upgraded his effluent system.

The new system – by Clean Green Effluent Company – is the first of its kind in the Eastern Bay of Plenty, says Shane, and has attracted attention from local farmers. “I had a busload turn up to have a look.”

He saw the system when on a trip to Invercargill and it caught his attention. “Shane had a small pond with an effluent pump that ran a travelling irrigator, all of which were basically non-compliant with the new regulations,” says Clean Green Effluent designer and general manager Lindsay Lewis.

“We stepped up and put a new, fully automated effluent system in that doesn’t require pondage.

“The patented weeping wall is designed for your herd size, and the distribution system is spec’d for your stock numbers,” says Lindsay.

Shane is stoked with his new system. “It’s all automated so I don’t have to do much.

It’s a little bit different – there’s not much storage and it puts out at a really low application, so we can still put effluent on the ground.”

The covered feed pad itself was put together by Aztech Buildings and Archway Group – Aztech constructed the roofing, and Archway took care of everything under the roof.

“We do all the design for everything that happens under the roof, including all of the concrete works and the floodwash system,” says Amanda Hodgson, co-owner with husband Matt of Archway Group.

Archway Group work closely with farmers to ensure smooth systems for their farm. “There’s a lot of detail that goes into something like this to make sure it works properly; feed faces, square metres per cow, and fall on the pad, for example,” says Amanda.

“We do as much as we can before we get on-site so we can minimise site time and weather interruptions, which ends up saving the farmer time and they can get on and use it quicker.” says Amanda. “We laid 500m3 of concrete and 300m of feed walls and feed rails – we thrive on making our systems better and more efficient,” says Amanda.

“We looked at lots, and we decided first off all we wanted the Archway Group feed-barn,” says Shane.

“They gave us a price and they stuck to it, which was good.”

Shane’s shed has a 75m pad under the roof structure, and feed walls, as well as turning aprons at either end, and two 25,000L concrete floodwash tanks.

“The feed pad is designed to make sure that, when you let the floodwash go, it’s got full coverage,” says Amanda. “This means it gets a good washing and you shouldn’t have to go back and do it by hand.”

“With all of our farmers, we try to think about how they can de-risk themselves from things like weather, compliance, and labour by keeping things simple,” says Amanda.

And because Aztech Buildings and Archway Group have a history of success, Shane says the process was a smooth one. “Archway Group works a lot with Aztech, so this isn’t the first one like this that they’ve done together,” says Shane. “We saw some others like this and decided this was exactly what we wanted.”

The single roof structure by Aztech Buildings is separated with a ventilation gap, specifically designed to encourage airflow. Shane says this gap helps keep his cows cool in summer.

The roof structure was custom-designed and built by Aztech Buildings to fit Kybush Surf Trust’s needs. Each side of the shed is 72m long by 12m wide.

The building features a central ventilation space, which ensures necessary air movement for both animal welfare and structural durability through the release of passive air and ammonia.

“We know it works well with the ventilation and they had that all sussed, the gap in the middle keeps the air flowing, keeps it really cool in there,” says Shane.

“The benefits of the summer housing are what give the tangible paybacks,” says Simon. “It gives Shane an extra management tool for the whole facility.”

And Shane says Aztech Buildings was able to provide him with long-lasting solutions.

“We looked at plastic options but decided we wanted something that was going to last, and something we weren’t going to need to replace parts on in 10 years’ time,” says Shane.

“We did the earthworks for the covered feed pad and the new effluent treatment system, and we assisted with the install for that too.”

Shane says he’s very pleased with their work. “Waiotahi sent Wayne to dig out these hills,” says Shane. “They were brilliant.”

Anthony says the Armstrong’s have been a long-standing client. “We’ve had a good relationship with them for many, many years – generations even.”

And so, the cows at Kybush Surf Trust have it good – very good in fact – and they’ll be looking forward to eating under-cover more in coming winters.