# 8 SIMPSON FARMS – ALL UNDER ONE ROOF 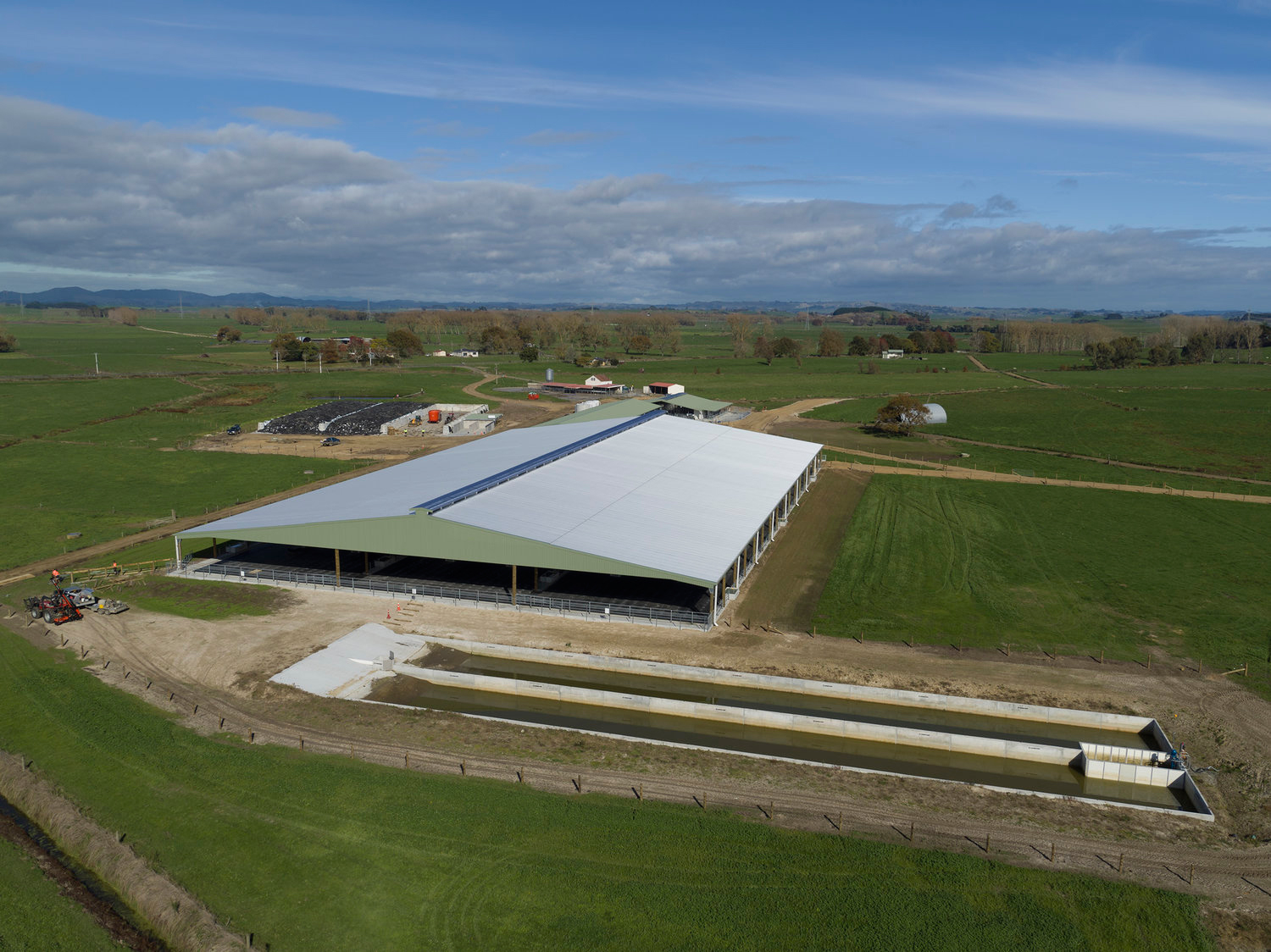 All under one roof

You know you’re on to a pretty special dairy shed story when you conduct the interview in the on-site office.

The well-appointed amenity, with its computer system, obligatory tea-coffee making facilities and large windows overlooking the shed, was a fitting setting for Mike Simpson to tell me how this extraordinary operation came about at Rangiriri in North Waikato.

The term ‘large-scale’ doesn’t do justice to the new dairy, just across the Waikato River on Glen Murray Rd.

Everything about it is big – 1200 cows milked on 640ha in a 64-bail rotary, plus what’s claimed to be the largest feed pad in the Waikato.

Simpson Farms dates back to 1964 when Mike’s grandfather bought a small block which his lawyer warned was “undesirable” swampy bushland.

However, he stuck to it, later acquiring a neighbour’s property. Mike’s parents continued the trend and bought the last 46ha three years ago.

Until recently, the property had two 44-aside herringbone sheds, milking half the herd each.

In June 2018, Mike says they started thinking about “doing something instead of doing two of everything”.

The key was a stand-off area to protect pasture and also enhance animal welfare. A three-year construction plan was compacted into 12 months, with the new operation up-and running for the start of this dairy season.

Six people were employed for milking, now two are required. However, Mike stresses cutting staff was “not a driver” in the project.

The site, formerly a paddock near one of the old cowsheds, covers 3ha. Three tractors and trailers were used during six weeks to cart fill from another part of the property to build up the new facility’s base.

This paved the way for the laying of 10,000m2 of concrete. Next to the dairy are three bunkers, each capable of holding 450 tonnes of feed.

Next came the giant feed pad, which Mike says not only protects pasture but prevents heat-stress in cattle. “So we have summer and winter safeguards, because in the past we just rolled with the punches with the weather.”

He’s “ecstatic” to make the transition from a grassed-based farming system. “It’s a real cool feeling.”

The 6100m2 pad features 32m long beams, with feed and water troughs to cater for the whole herd in one sitting. It can hold up to 9kg of feed per cow, each with 750mm of “feed space”.

Mike says the cows easily adjusted to the concept. A nutritionist has advised him to expect a rise in seasonal production per cow from 380-550 kgMS.

Feed is brought to the pad from nearby bunkers in the evening and after morning milkings.

Mike says the herd receives half its diet on the pad. It is cleaned via a floodwash system using  recycled water, stored in three 25,000L tanks.

Gravity-fed, the water flows down the pad at the push of a button, with material collected in large holding tanks at the bottom. The liquid is recycled in the operation, used twice-a-day, and solids are used later for fertiliser.

A similar system is used to clean the main yard, using 80 per cent recycled water and the balance coming from nearby Waikato River.

Mike says such technology was gleaned through visiting eight farms and “taking the best bits”.  Somewhat incredibly, the cowshed can be manned by one person, plus a yard-hand, with another on “farm duty”.

A new electricity transformer was required, with the switchboard requiring its own room. Mike says it helped that a number of those who worked on the new shed were familiar with the property.

After working with Simpson Farms for 30 years, Te Kauwhata-based Andrews Electrical wasn’t over awed by the scale of the project when the owners called and said simply: “We’re doing a shed”.

Director Allan Andrews says good planning was key, with a site meeting involving all contractors held before physical work began. “We all knew our roles and the schedule,” says Allan. “The technology is advanced, but not unnecessarily complicated.”

On-site from May/June 2018, the “whole new system” involved considerable undergrounding of cables. A new 200kVA transformer was required, generating 120kw if required. The switchboard has its own room, shared with water pumps for the milking plant.

Ducting – in sand beneath the cement – was used under the floor of the dairy, with kilometres of cables threaded through.

Aztech Buildings worked with Archway Group and Chapman Dairy to design and build the two main structures specific to the Simpson Farm requirements.

The flood-washed feed pad by Archway Group is split into three separate feed pads – for 300 cows each – and the building clearspans each feed pad with three 21m spans and features central ventilation. “This ensures necessary air movement for both animal welfare and structural durability through the release of passive air and ammonia.”

Simon says another key feature of the Aztech Buildings’ design is the rafter to purlin connection that eliminates bird-perch opportunities in the roof line.

Archway Group originally got asked to do the project as a two-three stage plan incorporating the old cowshed and using a 300-cow pad with the ability to add on and integrate into a new cowshed eventually.

Amanda Hodgson, co-owner of the Te Puke based company with her husband Matt, says they were asked back out a few months later to change the plan to include an all-new cowshed, undercover pad for 1000 cows and the effluent system. “Together we came up with what it looks like now.

“The most important thing we can stress is having a plan,” says Amanda. “Keep it current, customise and adapt it to the surroundings and the needs of the farm.”

Amanda says standing off this number of cows for longer periods of time comes with complex calculations of solids produced, and that all flows on to the sizing of the infrastructure and how to deal with the solids. “It’s often underestimated the pressure solids put on a system.”

The system is designed to maximise the use of gravity, enable use of an effective floodwash and capture solids so the effluent application area can be increased.

Amanda says the Simpsons have decreased their labour needs by keeping the design simple.

“A Protrack Rotary ID system identifies the cow as it enters the bail, and has a full alerting functionality including audio and visual alerts.”

It also allows Mike to easily update and record animal events, such as heats, health treatments and calvings.

“It is fully integrated with MINDA LIVE, so events entered will appear in the holding pen for approval,” says Teresa.

This product works hand-in-hand with the Protrack Draft system, used via iPhone and computer on Simpson Farms, which controls an automated three-way drafting gate. An electronic reader and antenna identifies an animal by number as she walks into the draft gate.

Waiuku Refrigeration Services took care of the dairy’s refrigeration needs. This included two new larger units to go with a smaller pair, also installed by WRS, in the old shed.

Water is used in pre-cooling milk through the new elements of the system, while existing chillers provide a secondary supply to the vat.

They also supply another vat for calf feeding and link to a hot water cylinder in the plant room.

Milk temperature is kept at between six and eight degrees Celsius. Equipment was delivered to the Rangiriri property in December. Two WRS staff were involved in the project, company director Mike Barnett and his son Dan.

Mike says the refrigeration systems obviously comply with industry regulations, including the required temperature, while the use of water means there’s no risk of glycol contamination.

Glycol can be used as a coolant in dairy sheds, but is not recommended by WRS. “The units used on the Simpson farm are also more reliable,” says Mike.

Two existing chillers were modified to suit the new milking system, but “nothing too radical”. As per industry requirements, the four refrigeration units are all on legs, are connected to nearby water tanks and can cater for any increased herd size in future. One of the large units works part time during a regular milking season, but “comes in” as required during the “flush”.

The Simpson’s 64-bail rotary was “getting up there” with the biggest farm dairy projects tackled by Morrinsville-based Don Chapman Waikato. However, director Shanan White says the job ran smoothly with no major issues.

A team of three-four staff were on-site for about 20 weeks building the cowshed and yard.

Shanan says a rectangle yard – as opposed to a circular shape – was used to connect with the adjacent feed pad.

Siting and design work were undertaken by Morrinsville-based Chapman Dairy. “My part was how it all sat on the site and followed the land contour,” says director Don Chapman.

“I had to make the dairy entrance and exit all work, from the farm, feed pad and shed.”

Don says several days’ work was involved in developing overall concept plans and design for the dairy and yard on the Simpson property.

Countless tractor-and-trailer-loads of material was moved, involving one-two staff. Tim says topsoil was taken off and sand added to the complex’s base before topsoil was put back.

The scale of the operation is “slightly above average,” says director Phil Read, whose company has tackled a 100-bail rotary before.

Three staff came up from the South Island and worked on the Simpson property for a fortnight, returning for another two days for commissioning.

Morrinsville-based Hutchies installed the water supply systems for the dairy and supplied pumps and tanks for effluent disposal.

Water was sourced from an existing system in the old cowshed, with three 25,000L tanks used in the new complex. Three tanks of similar size were installed by Hutchies for the effluent washdown  system servicing the feed pad.

Grant says the recycling system used for effluent from the feedpad is becoming commonplace in farm dairies due to council and industry standards. Water filtration pumps were also installed by Hutchies along with a variable-speed water pump, which Grant says provides good pressure. “A transfer pump was installed for movement of material in holding tanks at the end of the feedpad to effluent ponds.”

Material was sourced from a site on-farm.

“There was quite a lot of work for us,” says Peter.

Hygiene and teat-care was the domain of GEA FIL. Area manager Mark Mohring says cleaning products are dispensed by chemical pumps through the milking system.

In tandem he conducted water, chemical and plant testing on-site. This testing looked at chemical cleaning efficiency, water use and heat monitoring. “And the teat-care solution, dispensed through an automatic washing system, includes a Manuka honey additive.”

On-site for 10 days, Mark ensured shed hygiene and teat-care fell under compliance standards set by the dairy industry and Fonterra.